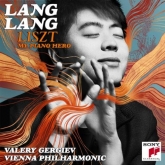 On the occasion of the bicentenary of Franz Listz' death, the young pianist prodigy Lang Lang pays tribute to the Hungarian composer who, he said, has been his master since the early youth. Apart from the splendid Eb major concerto S124, Lang Lang offers us very different universes by performing pieces such as : Campanella in G# minor, the 3rd consolation in Db major, the "chromatic grand galop" in Eb major, the liebestraum N°3 in Ab major, the Hungarian rhapsody N°6, the "sospiro" in Db major coming from the 3 concert sudies, the famous Racoczy march N°15 in A minor and the "Ave maria" S.558. Accompanied by the Vienna Philharmonic orchestra conducted by Valery Gergiev.